Loading SWF for the first time...
Adobe Flash is required to run this project in the browser. Enable Flash

Move campaign staff, organize political attacks, and win votes. Each turn you re-position your staff to take advantage of the lay of the land. When you order a staffer to attack, the game launches into "Talking Head Mode" where the staffers deliver dynamically generated lines of rhetoric. These are often quotes from the actual campaign. Secure enough votes or force your opponent's staff to retire to win. As you debate your candidate power grows. Each candidate has a different power based on their strengths and gaffes during the election.

For the first 5 levels you play as Romney. When his power charges you can select a city and stop its vote from counting. Your opponent cannot tell which cities are suppressed so if you use the power strategically you can send the opposition on wild goose chases trying to capture a city that won't matter.

Rick Perry's power damages your 3 most powerful staffer's credibility, but he will forget one at random. One trick to beating him is to let his staffers make the first attack, which will leave him open to a counter.

Each turn a coin toss decides if Herman Cain delivers one of his famous "Cainisms" and gets an attack boost or a female accuser comes forward and he gets an attack penalty. Cain's staff is split so be careful to watch for attacks from both sides of the map.

During an attack, Gingrich pops in and delivers some of his trademark soaring rhetoric, damaging the opposition's cred. Every 5 turns he goes on vacation and gets an attack penalty. Be careful Gingrich doesn't get a vote win while you are dealing with his forces near the river.

Santorum's conservative credentials are beyond question and thus he never gaffes. He is a formidable final boss. If you are careful you can push him out of the south of the state and take the cities there for a vote win.

Here you can choose Obama or Romney and fight for the presidency in the swing state Ohio. Because the courts overturned the voter registration acts, Romney has a new power "Moderate Mitt" where he delivers a line of moderate conservative rhetoric throwing Obama off guard and damaging his staff's credibility. Obama focuses on the ground game with his power "Its the Votes" letting him capture votes at twice the speed. 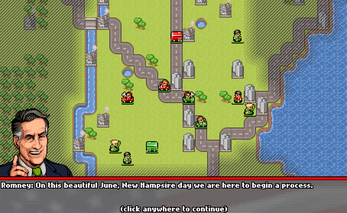 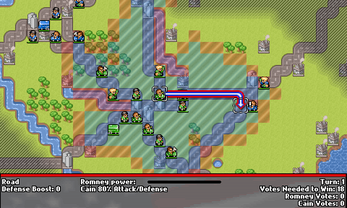